The 3 zones of Sangiovese Riminese and the wines

Sangiovese is a great vine with a historical presence on our hills. It has a great capacity to adapt to different soils, and is capable of  expressing every aspect of the soil and climate, without ever losing its character.

We are dedicating the project "Land of Sangiovese from Rimini" to the Sangiovese vine by selecting vineyards with the best exposure conditions of soil and climate from our areas.

A new agronomic and oenological approach has been designed and implemented, with the aim of rebuilding the identity of Le Rocche Malatestiane, which has the Sangiovese grape and its territorial identity as its fulcrum.

We started from there and from our 3 different areas of Sangiovese vineyards to manage production and separate the bundles of grapes upon their arrival in the winery.

It is important for Le Rocche Malatestiane to communicate its identity and this can only happen if the wines produced are the direct expression of the territory.

We started from a map and we positioned our winegrowing companies. The selections in blue, yellow and green are related to the selection of grapes that led to the 3 Sangiovese Superiore wines. 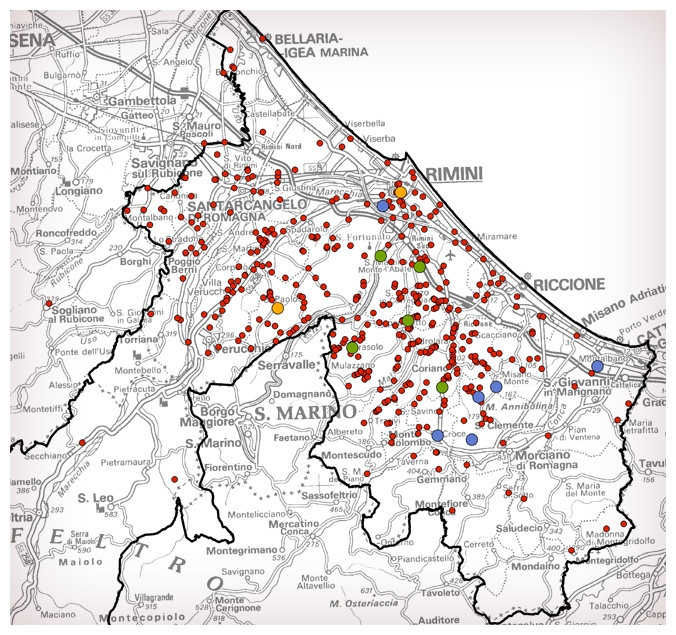 Production area: the hinterland of Rimini, Riccione and Coriano.

Sigismondo Sangiovese Superiore wine is characterised by its deep red colour and roundness of flavour. In olfactory terms it is rich in aromas of red fruit with medium to low acidity. It is a powerful wine, rich in extract and tannins, as well as fruity with notes of bitterness.

Notes on the name: dedicated to Sigismondo Pandolfo Malatesta, Signore (Landlord) of Rimini in the fifteenth century.

This production area is characterised by particularly colourful clay and chalky soils, near the town of Gemmano. The altitude is around 250 m above sea level and on these area Sangiovese Superiore I Diavoli is produced.

The Sangiovese of this area has strength and elegance, a fruity taste, round tannins and a medium loaded colour, a purplish red Sangiovese. Even though it is a potent Sangiovese, I Diavoli retains good acidity and the integrity of the fruit. It is an elegant expression of Sangiovese, powerful but balanced.

Notes on the name: in the territory of Gemmano, there is the Onferno nature reserve. It is known for the presence of karst caves and a colony of bats that is amongst the largest in Europe. It was previously known as Hell due to the rising of water vapour from the mouths and crevices of the soil from the caves below.

They are areas of land that are around 300 m above sea level characterised by the presence of loose sands, often pebbly soils and at times high in chalk.

The Sangiovese wine that comes from the productions of this area are more elegant and mineral, with higher acidity, a light red colour and delicate hints of fruit. This is the profile of Sangiovese Superiore Tre Miracoli.